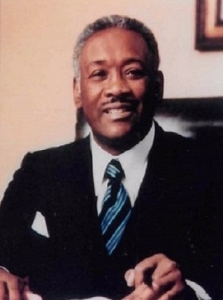 Ecumenical theologian, advocate for fair and decent housing, proponent of civil rights, political leader and public servant are only a few of the characteristics of Bishop Frederick Calhoun James, the Ninety-Third Elected and Consecrated Bishop of the African Methodist Episcopal Church

Bishop Frederick Calhoun James was born on April 7, 1922 in Prosperity, South Carolina, the son of Edward and Rosa Lee James.

He graduated from Drayton Street High School, Newberry, South Carolina. He graduated from Bettis Junior College with an Associate of Arts Degree and earned his B.A. degree in History/English from Allen University (1943), and his Master of Divinity degree from Howard University School of Religion (1947). He also studied at Union Theological Seminary in New York. He married Theressa Gregg, December 30, 1944.

As a champion for civil rights, he became a community and state social and political action leader. In 1960, he was elected Consultant/Director of Social Action of the African Methodist Episcopal Church. In this position, he formed a close relationship with Dr. Martin Luther King, Jr. In 1963, he became President of the Effective Sumter Movement of Sumter, South Carolina, a historic chapter in civil rights. In 1967, as pastor of Mt. Pisgah A.M.E. Church, Rev. James led the sponsorship of the first 221(d) Rent Supplement Housing Project in South Carolina. In 1969, he initiated the first 221(h) Home Ownership Project in the state. He was South Carolina’s first African American Congressional District member of the Department of Alcohol and Drug Abuse and the Department of Social Services. He was the first African American to serve on the Board  of Directors at NBSC (National Bank of South Carolina), now SYNOVUS, the first African American member of the Greater Sumter Chamber of Commerce and the first A. M. E. Bishop elected from a South Carolina A. M. E. Church pulpit. From 1987 to 1992 he was a member of the Columbia Housing Authority and served as vice chair. He also served as Vice President of the S. C. Christian Action Council.

In 1972, he was elected to the AME Bishopric and was assigned as the Presiding Bishop of the AME Church in South Africa, Lesotho, Botswana, Swaziland, Namibia, and Mozambique. Headquartered in Cape Town, South Africa, he established schools, a publishing house, churches, and other institutions. Bishop James later was assigned bishop in Arkansas and Oklahoma (1976). He formed a lifelong friendship with then Attorney Bill Clinton. In 1984, he was assigned to the 7th Episcopal District, State of South Carolina. In each of these positions, he built housing projects, strengthened schools and led two colleges to full accreditation; Shorter College, N. Little Rock, Arkansas in 1981 and Allen University, Columbia, South Carolina in 1992. In 1992, Bishop James was assigned Ecumenical Bishop and Chaplaincy Endorsement Officer of the African Methodist Episcopal Church International. In 1993, he was given major fiscal and reconciliation duties as Bishop of the Second Episcopal District (Maryland, Washington, D.C., Virginia, and North Carolina) of the African Methodist Episcopal Church and he stabilized the District. In 1994, he was selected by President Clinton as an official member of the delegation to attend the inauguration of South African President Nelson Mandela, and in 1998 he was again chosen to accompany President and Mrs. Clinton on an official visit to South Africa.

Bishop James is a former member of the White House Advisory Board on Historical Black Colleges and Universities, the U.S. State Department’s Advisory Board on Religious Freedom, and National Vice President of the Interfaith Alliance. A life member of the NAACP, Alpha Phi Alpha Fraternity, and a 33-degree Mason, he was inducted into the South Carolina Black Hall of Fame (1991) and the Columbia Housing Authority Wall of Fame (1994). In January of 2003, Bishop James was awarded the state’s highest honor, The Order of the Palmetto, for his significant contributions to South Carolina

He retired from active duty in 1996 and he and Dr. Theressa Gregg James, Episcopal Supervisor, retired, returned to live at their home in Columbia, South Carolina.

Dr. Herman O. Kelly, Jr., Pastor Of Bethel African Methodist Episcopal Church in Baton Rouge, Louisiana will serve as the Keynote Speaker at Student-Athlete Support Summit at Louisiana State University on Friday April 5, 2019. He will be addressing counselors and support staff to help athletes succeed in their academic endeavors. Dr. Kelly will present the three P’s, Passion, Purpose, and Power. Attendees will be from around the state of Louisiana. Dr. Kelly serves as adjunct Faculty at Louisiana State University In The African and African American Studies Program and The School Of Education